A CULVER INSTITUTION SINCE 1976

My father, Jim McCormack, started Papa’s in 1976 with a dream of creating a place where customers were friends, families could call their own, and generations would always remember their great times at a Culver institution, Papa’s.

My mother Marion, and the McCormack kids, thought he was nuts. Jim was a graphic designer. He was actually credited with designing the first Beatles album when Vee Jay records from Chicago owned them for a year, eventually selling them to Capitol Records for $350.00. You can read more about this on the back page of the Papa’s menu.

My father, the original Papa, passed away after a heroic cancer battle in the early 80’s. My mother, brother Jim and I grew the business throughout the 80’s to become the institution it is today. Papa’s added on a screened patio in 1984, a new 30 seat section in 1987, and a bar and a hundred seat dining room addition in 1989. I then took a brief hiatus to further my music recording career, and rejoined in 1995 when Marion passed away. Through most of this time, we were blessed to have Carla Foust as our Front of House manager. Carla and I later married and she currently serves as my partner and acting CFO. In an unexpected move in 2003, my step son Jason Newman, graduated from Indiana University and decided to get back into the food service business with us here. He has been with us ever since. Papa’s continued to steadily grow throughout the first part of the 2000’s and then one day in 2011, I got another unexpected call. My other step son, Matt Newman, whom also has a degree from Indiana University; he and his wife Catie wanted to come back to Indiana from their home in Portland, OR. Much to my amazement, they joined the Papa’s staff in September of 2011. 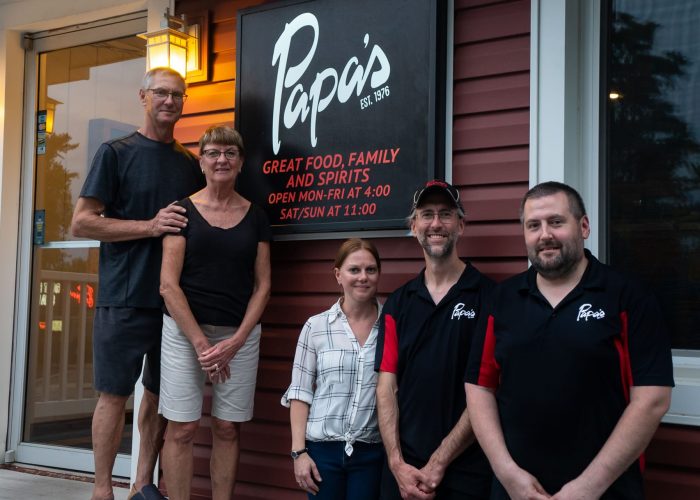 All of the kids bring great skills, energy and creativity to the plate, helping Papa’s sport a very extensive wine list, ton’s of craft beers, great service and the same great beliefs my father had years ago. All of this combines to make Papa’s Culver’s oldest and most trusted eatery. We do this by using the best ingredients, picking the best people, and living this dream with a passion. We’re not a chain restaurant, we’re better. We’re a family restaurant! Come enjoy Papa’s like thousands do every week. You’re one of the family.

The Papa's Story
Join our Team